I BURN BUT I AM NOT CONSUMED 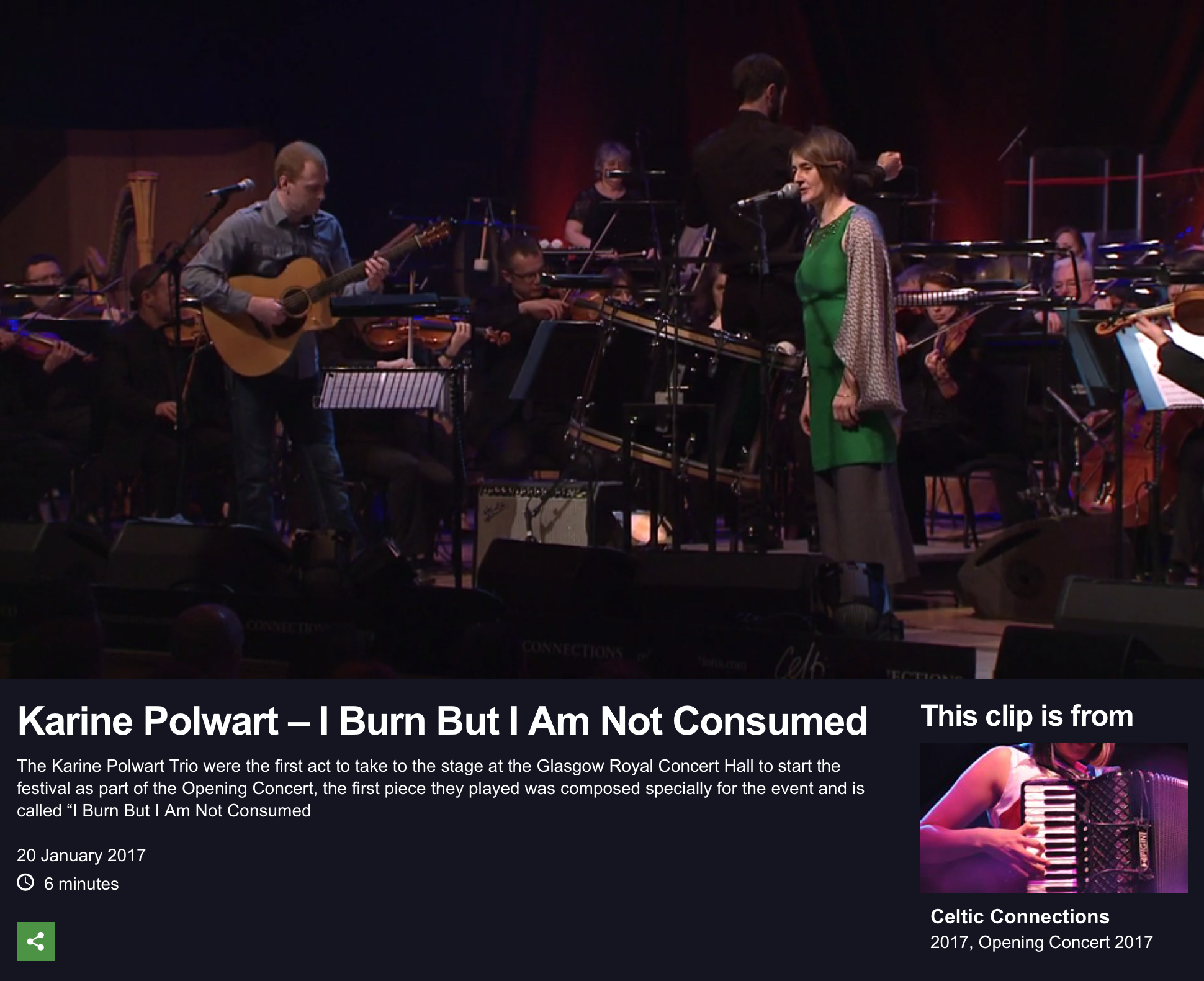 Karine’s powerful, poetic and dramatic cultural statement in respect of the Trump presidency.

Filmed live by the BBC at the opening concert of Celtic Connections Festival in Glasgow, it was performed with the BBC Scottish Symphony Orchestra as a prelude to Karine's song “Cover Your Eyes” which was used in the award-winning documentary 'You’ve Been Trumped' about the construction of a luxury golf course on a beach in Balmedie, Aberdeenshire, and Trump’s shocking treatment of a Scottish family and his attempts to force them off their land.

On May 11th 1930, Mary Anne Macleod, from Tong on The Isle of Lewis, boarded the RMS Transylvania from Glasgow to New York City, in search of a better life. There, she fell in love with Frederick, whose father had come to America from Germany as a 16 year old barber.

Mary Anne’s middle son would return years later to Scotland, home of his MacLeod ancestors, whose clan motto is: I burn but I am not consumed.  And here - in the name of progress and profit - and executive golf - he would pit himself against time and tide. In his wake, the shifting sands at Balmedie in Aberdeenshire would never be the same.

That son of Mary Anne MacLeod is powerful.

So too is The North Sea.

The marbled, metamorphic rock of Lewis is two-thirds the age of Earth - amongst the very oldest found on our planet. It knows about power. It’s seen a lot. And so I wondered: what might that rock of Lewis have to say about the Inauguration - tomorrow in Washington DC - of the 45th President of the United States of America - Mary Anne’s middle son? This is what the rock told me.

hewn from granite, salt and sky

upon a foreign shore:

the ocean is a mirror gleam

in which you see yourself,

of strata forged in fire and earth,

the stone crib of your mother’s birth,

in which your forebears lie.

Fish may swim at your command

across The Atlantic to the land

of dreams and self belief and boundless chance.

An exile tale. An immigrant dance.

You’re captain of a frigate now,

So set your compass, raise the mast,

Blow up the sails,

Erase the past, and future, if you must.

Together we can stand

and watch the peat-land turn to dust.

This is your apprenticeship:

nor does the splendid, blazing sun

that alters how the currents run.

but I am not consumed, my child.

The Minch whips up a spindrift storm.

At Uig Bay and Luskentyre,

The shore erodes and disappears.

And, meantime, you are stoking fears

and stacking hope into a pyre.

You strike a match.

Your mother was a wee girl once,

who played upon my rocky shore.

And you, you are broken boy,

You who see nothing but your face

in the sheen of The Hudson River.

A balancing is yet to come,

although by then you may be gone

and leave a desert to your sons and daughters.

Still, these waters, they will rise,

the North Sea haar will cover your eyes,

despite your appetite for lies.

your disregard  for truth.

of strata forged in fire and earth,

the stone crib of your mother’s birth,

in which your forebears lie.